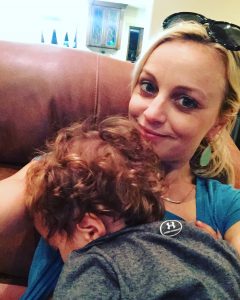 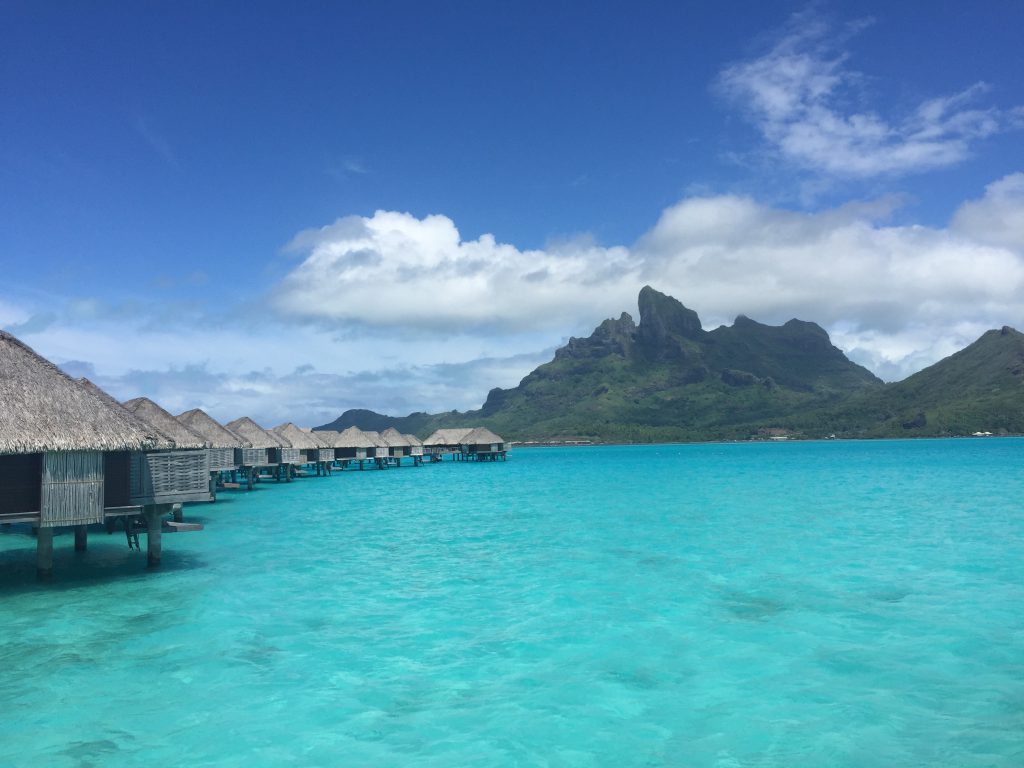 After four years, we finally did it. We took a husband/wife trip without kids! For a year, we had tried planning a kid-free trip to nearby places like Palm Springs, San Diego, and San Francisco. For whatever reason, (usually my husband’s work schedule), none ever materialized. After an insanely busy summer on top of being out of our home due to water damage/renovations, my husband and I decided to pull the trigger. “If we’re going to do this, let’s commit to it and just go big,” I said. “Otherwise, it’s never going to happen.” I had always wanted to show my husband my all-time favorite island destination, Bora Bora, which I had visited a few times before for work. (Not too shabby work, huh?!) I’ve raved about my favorite Polynesian paradise for years…how “nothing compares to it,” and “when you’re there, you feel like your surrounding is fake,” and “it’s too beautiful to be real.” After showing photo after photo and acting as though I was a sales representative for the Bora Bora Board of Tourism, my husband gave me the thumbs up. Thus, we went online, put our saved up airline miles to good use, and booked our adult getaway to the “Pearl of the South Pacific.” Bora Bora, here we come!

When I had previously experienced Bora Bora for work, I visited some lovely resorts. I stayed at the Intercontinental, Sofitel, and my favorite property was what is now the newly renovated Conrad Bora Bora Nui Resort. However, I had heard and read so many amazing things about the Four Seasons Bora Bora. After doing our own research and finding a deal, we decided to give it a try.

To provide an overview of the hotel, Four Seasons Bora Bora is perhaps one of the most picturesque spots on the island. The location is phenomenal. The resort is surrounded by white sand islets on an outer coral reef harboring the most gorgeous color of turquoise lagoon. And as if that isn’t enough, the backdrop is the absolute best views of Mt. Otemanu. (It’s seriously the most gorgeous views EVER!) Talk about some major beauty-sensory-overload! It consists of 300 over-water-bungalows and ten beachfront villas. The resort’s sprawling property includes a spa, lagoon sanctuary, infinity pool, fitness center, tennis courts, four restaurants, and a chapel.

Overall, it was truly an unforgettable, magnificent experience. Our mission to spend quality time together, recover and rejuvenate from our summer, and create some beautiful memories in such a special place was accomplished. It truly exceeded all of our expectations and then some. We HIGHLY recommend a Bora Bora vacation, hands down. I didn’t do any scuba diving on this particular trip, but I have in all of my previous trips to Bora Bora. To date, it has been my most favorite scuba diving destination with the vibrant colors and amazing variety of sea life. If you can stay a while and are able to travel around, I would definitely suggest visiting Moorea and a day in Papeete (the downtown market is a must-do!), both of which I’ve visited on my previous work trips. I have also visited Rotorua and Huahine which were also memorable. (Huahine has some great vanilla bean fields…I love me some vanilla beans so I greatly advise to order vanilla bean-flavored desserts in Tahiti as they are the real deal! Best Vanilla Bean Ice Cream on the planet!) A few of the friends we made on our vacation visited The Brando on Tetiaroa and said it was unbelievable. I have never been but it sounds exceptional! Even though Bora Bora is a hike for those in the Midwest and East coast, I would still highly recommend this Tahitian paradise…(especially considering the Zika scare in other tropical destinations). It’s truly a magical place that you will create some beautiful memories with your loved one. 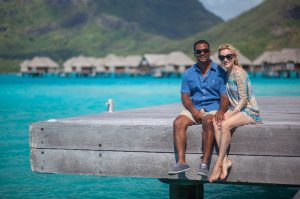 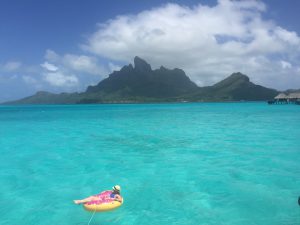 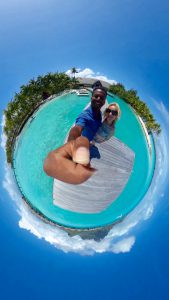 After fixing some website issues, I am finally back up and running! HOORAY! With that said, I am now able to post some of my saved posts from the last six months. I’m starting out with my favorite…Anders’ 2nd Birthday “Rock” Party! 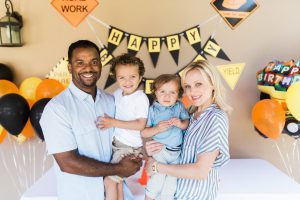 I don’t know what it is about rocks, but my Anders is OBSESSED! Small, big, rough, smooth, ugly, pretty…it doesn’t matter what they look like, he loves them all! Thus, when I was trying to figure out a theme for his 2nd birthday, I asked my husband, “Why don’t we throw him a rock party?” I knew it sounded strange, but I couldn’t imagine him loving anything more than a party centered around his passion for rocks.

Since the party-goers consisted of his fellow two-year old music class pals and their siblings, we kept the rock activities very little-kid-friendly. We had large bins filled with cereal in the shape of small pebbles/rocks and provided small shovels to scoop the ‘rocks’ into little dump trucks and buckets. We also had a rock painting table which seemed to be the favorite among the older siblings. In lieu of gifts, we asked everyone to bring a cool rock. The actual invitation read, “In place of gifts, please bring a rock of any shape, size or color. Whether it’s from your backyard or off the side of the road, anything will do!” Needless to say, Anders LOVED his new rock additions to his collection. Some of the gifted rocks were quite impressive! He received some awesome geodes, a large rock with his name painted on top, and one that was bedazzled. Who knew an actual rock party involving rock-gift-giving could be so cool?!

A big thank you to our photographer Ashley Burns for the awesome photos! And thank you to Stephen Joseph Gifts and Hape Toys for the great party favors, as well as our beloved Polkatots for the AMAZING cupcake cake (with edible rocks)! And I can’t forget my son AJ who helped his mama decorate the night before and make the Oreo dirt cups…he loved putting the gummy worms and mini dump trucks on top of the “dirt” topping. This party theme truly “rocked.”:)

Pics below by Ashley Burns. 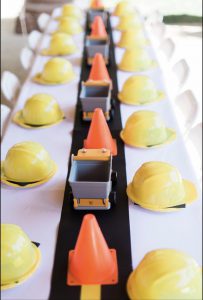 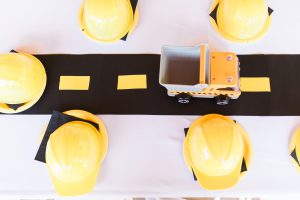 Our lovely street-table runner made out of construction paper. 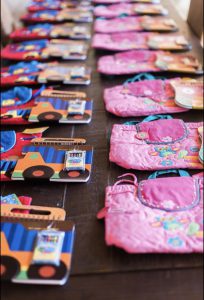 Our party favors were these adorable Stephen Joseph activity books and pull-string backpacks. Dump truck-theme for the boys and a pink garden/owl-theme for the girls. 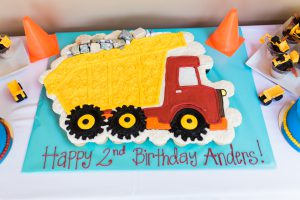 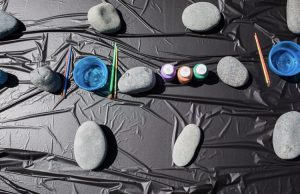 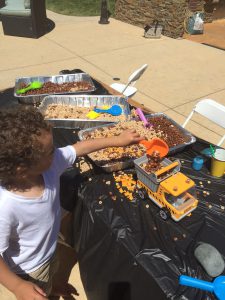 The pebble/rock table (i.e. Cheerios and the healthy version of Cocoa Puffs) with small scoops. 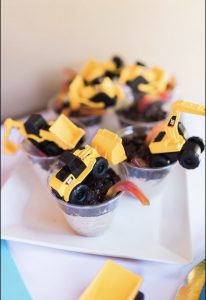 Our awesome Oreo ‘Dirt’ Cups, which was one of my personal favorites as a kid. AJ took great pride in decorating them with the worms and dump trucks. 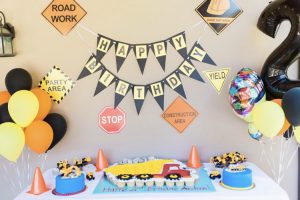